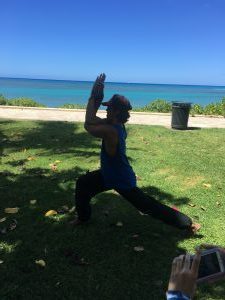 The Mana Yoga and Beach clean up took place at Kapiolani Park. I arrived late to the clean up due to travel issues but I still got to walk around and pick up trash with the others. After the clean up we got to go into some nice shade and start our yoga lesson. I took this picture of the instructor before the lesson started. To be honest, the yoga positions were hard for me because I am not flexible at all. It was difficult for me to do the beginners pose and many other ones. I also never thought yoga could be a workout. We did planks and my arms started shaking after a minute or so. Then we went into a half push up which was also difficult after a few times through. Then we went into the most famous position, the downward dog. It honestly stretched me out after being in that pose for such a long time. There were many other positions that had my muscles feeling like rubber bands.   The best part to me was the breathing exercise we did at the end of the lesson. It was one of the most relaxing and heavenly things I’ve ever done. Overall this event gets an A+ from me. It was beautiful to help clean the beach/park and test my limits with yoga. I suggest this to everyone wanting to try something new. Before the lesson I couldn’t touch my toes and after I could almost put my palms on the ground. This was one of the best experiences ever!